I usually don’t scour the menswear shows like I do the women’s, but as the Men’s F/W 2016 collections played out, Instagram was flooded with images of embellishment and army inspired fashion that made me stand at attention.  I study the use of passementerie in royal costume and military uniforms signifying rank, status and power. Gold thread has been used to sew ribbons and embroidery, making frog closures, tassels and epaulettes since the guild of the Passementiers was created in France in the 16th century.  (Passementerie literally translates to “turn by hand”).  These artisanal techniques have embellished the militia of the world for centuries.

At the forefront of this embellished design trend is Olivier Rousteing of Balmain.  He marched his models — aka the #BalmainArmy — down the catwalk, in intricate military-style embroidery and passementerie.  His audience, plus 2.2 million Instagram followers, exploded.  I have been a fan of Balmain, but never realized the celebrity and cult following it had with this 30 year-old designer and serious businessman at the helm.

{A Hussar or Hussard is a lightly armed, horse-mounted, soldier; usually charged with reconnaissance.}

Rousteing’s fascinating story, featured in the New Yorker last year, explains his rise and motivation. As an adopted bi-racial son, he believes that abandoning his search for his birth parents fueled his passion for the transformative power of clothing as a way to invent his origins.

He is determined to build a “Balmain Nation” and reported to Vogue,

“For me, there is no aggressivity about army… sometimes you need soldiers more than models.”

Balmain is doing just that, amassing soldiers (followers) to build its brand or “nation.”  With each collection, Rousteing invents modern regal origins for Balmain fans globally, from the Kardashians and Justin Beiber to the masses.  His designs for H&M sold out in a matter of hours.

Dries Van Noten also presented a collection nodding to military rank.  His embellishment had a more graphic quality, with reason.  Van Noten tapped renowned psychedelic artist Wes Wilson to design fabric, and it looks like he designed the embroidery as well. Van Noten’s talent for delivering an elegant and modern cultural mash-up is bottomless.

His collection also incorporated ribbon by masterfully embroidering it into intricate shapes.  This was a technique used in England in the 18th Century in both the military and in upper class dress.  See the entire Dries Van Noten collection here >> Vogue Runway A/I 2016

Dolce & Gabbana showed exquisite embroidery techniques, fit for an extrovert.  Their baroque take on fashion is engaging in this “look at me” decade where selfies rule.

The embroidery throughout these collections was mesmerizing in technique, and reminded me of  a recent video I saw about the embroidery atelier in London Hand & Lock.  Established in 1767, these artisans were originally commissioned by the Royal family and military. Now they also serve elite fashion houses.  To get an insider tour and learn about the process that has remained intact for 250 years, click below.

I was surprised to learn that Hand & Lock has classes coming to Chicago and Williamsburg VA.  I would LOVE to attend one of these to learn this age-old technique of embroidery.  Want to join me?

I am so glad Instagram took me down an embellished rabbit hole of research. I’ve edited it for your enjoyment, and I am so pleased to have learned more about embroidery, and about the Balmain Nation, of which I am now officially a citizen.

Keep up the #trimspotting, I love connecting with you all virtually, and especially IRL. 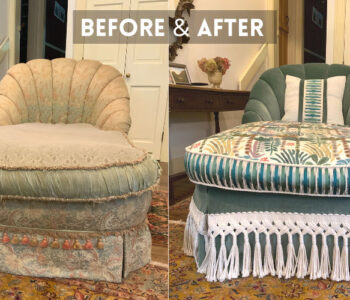